The CW’s Mary Queen of Scots soap opera Reign took an axe to historical accuracy. Yet beneath the fashion and fantasy, the vital beats were there; Adelaide Kane’s Mary married the Dauphin of France, before returning to a turbulent Scotland a teen widow.

Now, we have a wannabe serious, grown-up movie, inspired by John Guy’s sympathetic biography – originally published as My Heart is My Own.

We pick up with Mary (Saorise Ronan) washing up on the shores of her native land. She takes one look and retches. Her half-brother James is a bastard (as in Jon Snow), while the country is in thrall to David Tennant’s firebrand Protestant cleric John Knox.

Then there’s her cousin, Elizabeth I (Margot Robbie). 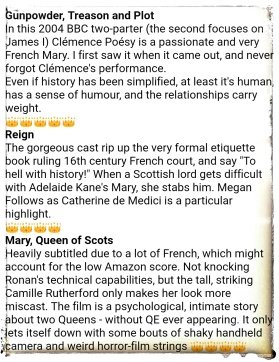 Mary had become Queen of Scots as a baby, but through her grandmother (Henry VIII’s sister) she also had a claim to Elizabeth’s throne.

Having grown up safely in the French court, critics saw Mary as a pampered princess. Guy, however, describes a charismatic, multifaceted diplomat.

The movie shows this by having Elizabeth’s courtiers say, “She’s formidable, Madam!”

At nearly 6ft tall, Mary liked to dress as a man to punk ambassadors. Just don’t expect to see this in the film – she might have been a fun gal by 16th century standards, but in steely Saorise Ronan, Mary is a straightforward, strong heroine.

She marries a vile brat named Darnley, who is murdered by Bothwell (established early as Mary’s sworn defender but absent for most of the movie), who then coerces Mary into marrying him instead.

The film dashes through the sequence of events leading to Mary’s downfall.

Her flight to Elizabeth climaxes in a fictional meeting in a laundry shed. Despite losing her own country, Mary won’t shut up about what a superior Queen she’d be. Facing her young, beautiful ‘rival’, Robbie looks shook. The greatest enemy to her insecure, frail Elizabeth is ageing before modern medicine or Instagram filters.

In Guy’s (well-researched) revisionist account, Mary was Britain’s unluckiest ruler, prey to Elizabeth’s Catholic-hating advisors, the Protestant Reformation, and the factionalism of the Scottish nobility. Tragically trusting of family, Mary – still only in her twenties – had disastrous taste in men.

For Josie Rourke’s film, this is largely simplified to Mary being the victim of gender bias. She’d have been best friends with her cousin-over-the-border if it weren’t for the patriarchy. The fact that one of them chopped the other one’s head off should serve to remind us, the #metoo generation, that men suck.

Sure, it’s just a film. But if you want historical fan fiction about the perils of female leadership in a male world, featuring ‘woke’ royals, you’ll have more fun with Reign over on Netflix.

6 thoughts on “FILM vs BOOK: Is the MARY QUEEN OF SCOTS film as good as the book?”